A few weeks after the 6th edition of Io Dono we try to summarize the event.

Let’s start with the numbers:

The social response of the event was also significant: over 1500 accesses to the website and 33,000 users reached on Facebook.

Starting from Lioni at 9.45 am, the caravan reached Sant’Angelo dei Lombardi and then Guardia Lombardi, our “cima Coppi” this year at 985 meters above sea level. The group then went on to Sturno and Gesualdo; on these stretches, covered during the central hours of a particularly hot August Sunday, the temperature ranged between 35 and 38 degrees, with peaks of 42 degrees measured by the odometer of the spare cars. Subsequently, the participants made further stops at Villamaina and its Terme di San Teodoro and Torella dei Lombardi.

The cyclists were between 6 and 82 years old and among them there were many transplanted, some of whom, more than usual of the appointment, are now friends of Io Dono (among them a particular greeting goes to Enrico, involved in a unfortunate accident: we expect him, even more fit, next year’s edition). This year’s event also saw the pleasant novelty of the participation of prestigious testimonials of the Paralympic national team: Carlo Calcagni, Leonardo Melle and Angelo Rammazzo. The purpose of the initiative, in addition to the original aim of raising citizens’ awareness on the importance of organ donation, has expanded over time to the topic of research on rare diseases and this year has broadened its horizons towards disability and the struggle to violence against women, to promote the vision of an increasingly supportive community.

During the stops of the caravan of cyclists in the various localities there have been interventions of the administrators of the territory , testimonies of the scientific world, of dialysis and transplanted, contributions of the various associations that sponsored the event and of the Regional Observatory on the phenomenon of violence against women, as well as testimonies of the Paralympic athletes participating in the cycle tourism.

During the course of the day there were numerous subscriptions to the register of donors.

The arrival in the evening in Piazza San Rocco in Lioni, awaited by thousands of people, was preceded by the flag-wavers of the Elaion rehabilitation center in Eboli and a festive group of cyclist children. The party continued with the performance of the flag-wavers and the evening musical show of the In-Super-Skilled of the Jade center, to which our affectionate greeting goes. 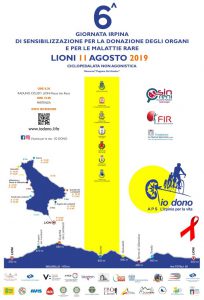 Do you have any questions? Do you need more info?
We’re here on purpose!